Doorstep visits offer a lifeline to the isolated

LIKE many folk of his generation, Roy Thomasson has a lot of time on his hands.

The 89-year-old loves cook-ing soups and has even mastered Zoom chats with the local Methodist church, but he admits that he spends a too much time sitting and worrying at his home in Town Head, Middleton-in-Teesdale. He is not alone.

Hundreds of elderly people across the dale are in the same boat. Lockdown has cut them off from their social life. Roy is a widower and his family live away. Popping down the shops is a no-no, and even his weekly visits to the village lunch club are off the menu. Neighbours and even passersby have pitched into help with shopping, and carers come round regularly, but life’s not the same.

This is where Teesdale Day Clubs has stepped in. Although the charity had to can-cel its lunch clubs in March, its staff and volunteers began weekly phone calls with its 200-or-so members.

Now thanks to funding of £9,700 from Teesdale Action Partnership, staff are taking that further by visiting peo-ple’s homes to have a socially distanced chats in gardens and on doorsteps. “Since it [the pandemic] began, I have been to town twice to the bank. For the first ten weeks, I did not go out the door. These visits are excellent,” he says.

She says: “Lots of our members do not see a soul or speak to a soul. Can you imagine that? “We can chat and in a way it’s more intimate. You can get to know someone. That’s Doorstep visits offer a lifeline to the isolated harder in a group of 30 people at a lunch club, although it’s no substitute to those lunch clubs.” 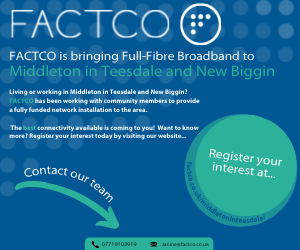 It’s the simple things. Roy is fond of bratwurst sausages from Heron, in Barnard Cas-le. He enjoys them with soup that he makes from ingredients at hand.

But the lock-down meant he couldn’t get to Barney to buy them.

“Somebody walking past said she had reason to go to Heron and got them for me,” explains Roy, a retired engineer. “It’s just a stupid thing but I really like those sausages.”

At 67p for a 250g pack, Roy jokes that the secret is out the bag. Madeleine uses one of her farmer husband’s walking sticks to estimate the two metre rule. She brings her own tea in a flask and strictly follows the guidelines. Roy says he has family in Corfu.

“This is the time of year that I would have been there,” he adds. Asked how he spends his time, he is quick to reply. “I sit and worry about things. I col-lapsed last year and came back from hospital with a pacemaker.”

Madeleine points out how Roy was, until fairly recently, a keen badminton player and an eager volunteer dishwasher at the day clubs if staffing was short. “A lot of people on their own had to become independent. “Having that taken away from them in the pandemic has been difficult for them,” says Madeleine, who de-scribed Teesdale Action Partnership’s funding as crucial to providing this lifeline service.

“We are looking at getting the lunch clubs back up and running and have a real commitment to that,” she says “It’s not just the food, it’s the company,” adds Roy. Until then, the doorstep visits are providing an important stop-gap. If you know of anyone who might benefit from the sup-port call, Andrea Hobbs at Teesdale Day Clubs on 01833 695822